A Facebook friend of mine shared a link to a post on the Ms. Magazine blog called “10 Things That American Women Could Not Do Before the 1970s” by Natasha Turner.  The post was a real eye opener in and of itself when you consider the 70s weren’t that long ago.  Even in 21st century America, women still lag behind men in how they are compensated for the same work.  In a lot of parts of the rest of the world, women are still considered less then men.

I am a woman. I am Canadian. I am also 62 years old with accumulated wisdom and knowledge which has been accrued gradually but not gently. I have watched the passage of time and the impeccably slow journey that women throughout the world have made in gaining any sense of the obligatory “equality” or “rights” so freely given to holders of penises. With much amazement I realize that the Women’s Movement from the 1970′s seems to have stopped somewhere in the cosmic sense of time, and that which I take for granted is not even recognized in many other parts of the world; and even in our neighbour to the south; the U.S.A. Young women of todays era must re-kindle their brains to continue the fight to the stage where “rights” are a given; no longer to be fought for. Sadly, internationally, the fight must go on.

That sums what still needs to be done.

Yesterday I posted about the Buffalo’s mayoral race.  One thing I believe is that Sergio Rodriguez could bring a new approach to the mayor’s role in managing the city and addressing problems long plaguing the Buffalo.  This interview gives you a glimpse at what he wants to do and what he is all about.

Part of Why I do what I do in Broadway-Fillmore 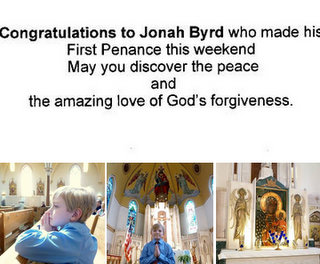 I made my my first confession at Saint John Kanty back in 1974.  I have countless family members who did the same over the last century…mother, cousins, brothers, aunts, uncles, etc.

It brought tears to my eyes to have my son Jonah do the same.

Saint John Kanty and the other heritage churches in the neighborhood are important.  They are living breathing links to Buffalo’s past. Someday, my son will tell his children about the history and the connection to his ancestors.  It is a unique shared Buffalo experience.

If you have a link to neighborhood and its history, embrace it.  Our ancestors need us to tell their stories and honor them by supporting places like Saint John Kanty.

One of the coolest preservation initiatives around is a little something called Painting for Preservation.  The whole concept surrounds artists, community members and preservationists showing up at site to bring attention to an area or building that should be preserved done in a flash mob way through art.

I have participated in a few “Art In” events for the effort.  It is really amazing to see the  different type of artists who show up and participate.  My photos above are from a series of properties on East Utica in Buffalo done at an “Art In” on 05/18.

Here is a video with founders Sara Zak and Meagan Baco in 2011.

Black Sabbath is my favorite band ever…they are my Beatles.

I can’t wait for the album 13 coming out next month featuring OzzY on vocals.  It is the long overdue reunion album by most of the original members of Sabbath.

In waiting for the new album , I have been listening to a lot old Black Sabbath music featuring Ozzy.  This is “Johnny Blade” from their last album with the Oz man on vocals in 1978 Never Say Die.  Great song!